The Planning Fallacy is the tendency we have to underestimate the time, costs and risks of our projects.

I’m going to retire in 10 years…I am going to accumulate a good wealth in 5 years…I’m going to build the house in 2 years….. 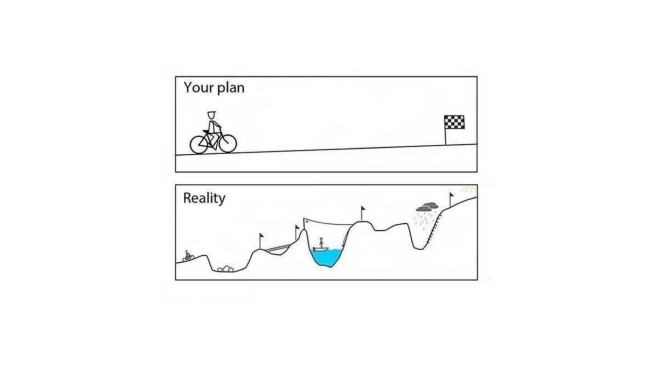 When we take on a project and try to estimate how much time will be needed to complete it, an optimism bias seems to get in the way of our best judgment and these estimations often fall short of the time needed in practice.

The term “planning fallacy” was first introduced in 1979 by Daniel Kahneman and Amos Tversky and was then redefined by Kahneman in a 2003 paper as describing not only the underestimation of time but also of costs and risks. This fallacy can be observed in all the fields where projects are undertaken, whether it be a student estimating the time for the realization of her thesis or a country planning for the construction of channel tunnels.

In order to minimize it, some researchers suggest to multiply the estimated time by a factor of two or more, according to the project.

In 1969, the mayor of Montreal proudly announced that the 1976 Olympics would feature a state-of-the-art coliseum covered by the first retractable roof ever built on a stadium. According to mayor Jean Drapeau, the entire Olympic venture would cost $ 120 million and “can no more have a deficit than a man can have a baby”. Because of economic problems, strikes, and other construction delays, the stadium roof was not in place until 1989, 13 years after the predicted date of completion—and cost $120 million by itself!

The most famous example that illustrates the planning fallacy is the construction of the Sydney Opera House. It was first estimated to be completed in 1963 for $7 million but the project ended up being finished 10 years after the expected date and for a cost of $102 million.

A striking example of the planning fallacy was published by Buehler, Griffin, and Ross in 1994. In this study, a class of students were asked to estimate the date at which they will finish their thesis. They actually completed their thesis, on average, in 56 days. However, they predicted they will complete their thesis in 34 days.

When they construct plans, individuals often consider the best possible outcome. They do not consider alternative possibilities.

Furthermore, in team settings, individuals are especially likely to underestimate the time that is needed to complete some project. Presumably, in these settings, individuals feel the need to impress other people. They want to be perceived as optimistic and efficient. This need to impress other people has been shown to magnify the planning fallacy.

As the mythological Warren Buffet would say “When investing pessimism is your friend, euphoria the enemy.”