Can the color of informations influence the investing decisions?

Can the colour that an athlete or sports team wears impact the performance?

Although other colours are also present in animal displays, it is specifically the presence and intensity of red coloration that correlates with male dominance and testosterone levels. Male mandrills, foe example, possess rank-dependent red coloration on the face, rump and genitalia, communicating male fighting ability to other males.

Because artificial stimuli can exploit innate responses to natural stimuli, Russel Hill and coworkers tested whether wearing red might influence the outcome of physical contests in humans.

In the 2004 Olympic Games, contestants in four combat sports (boxing, tae kwon do, Greco–Roman wrestling and freestyle wrestling) were randomly assigned red or blue outfits (or body protectors). If color has no effect on the outcome of contests, the number of winners wearing red should be statistically indistinguishable from the number of winners wearing blue. However, we found that for all four competitions, there is a consistent and statistically significant pattern in which contestants wearing red win more fights. This result is remarkably consistent across rounds in each competition, with 16 of 21 rounds having more red than blue winners, and only four rounds having more blue winners. The effect is the same across the weight classes in each sport: 19 of 29 classes had more red winners, with only six classes having more blue winners.

In the chart below you can see the results of the study: proportion of contests in Olympic combat sports won by competitors wearing red (right bars) or blue (left bars) outfits for all sports combined and for the individual sports of boxing (Box), tae kwon do (TKD), Greco-Roman wrestling (G–R W) and freestyle wrestling. 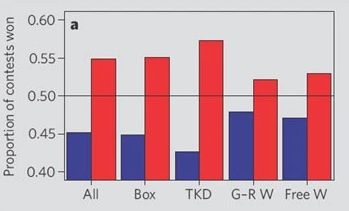 This led them to conclude that wearing red might improve an athlete’s chance of winning. Thus, artificial colours may influence the outcome of physical contests in humans.

Indeed, a preliminary analysis of the results of the Euro 2004 international soccer tournament, in which teams wore shirts of different colours in different matches, suggests that wearing red may also bestow an advantage in team sports and when opponents wear colours other than blue. The authors compared the performance of five teams that wore a predominantly red shirt against their performance when wearing a different shirt colour (four played their other matches in white, one in blue). They found that all five had better results when playing in red, largely as a result of scoring more goals Hence, color of sportswear may affect outcomes in a wide variety of sporting contexts.

In the footsteps of the previous researches, Norbert Hagemann, Bernd Strauss and Jan Leißing in 2008 published their work “When the Referees Sees Red“. They tested the preference for colors from the referees. Similarly to the former findings, they concluded that referees have a perceptual bias towards competitors wearing red and are likely to judge in their favor more often.

They write “We propose that the perception of colors triggers a psychological effect in referees that can lead to bias in evaluating identical performances. Referees and umpires exert a major influence on the outcome of sports competitions. Athletes frequently make very rapid movements, and referees have to view sports competitions from a very disadvantageous perspective, so it is extremely difficult for them to make objective judgments. As a result, their judgments may show biases like those found in other social judgments. Therefore, we believe that it is the referees who are the actual cause of the advantage competitors have when they wear red. Because the effect of red clothing on performance and on the decisions of referees may well have been confounded in the original data, we conducted a new experiment and found that referees assign more points to tae kwon do competitors dressed in red than to those dressed in blue, even when the performance of the competitors is identical”

Is the color has an impact on the investor’s behavior?

A study published this year by William Bazley, assistant professor of finance at the University of Kansas, argued that colour also has an impact on investors.

Once again, the colour that came under scrutiny was red.

“Visual Finance: The Pervasive Effects of Red on Investor Behavior” reveals that using the color red to represent financial data influences individuals’ risk preferences, expectations of future stock returns and trading decisions. The effects are not present in people who are colorblind, and they’re muted in China, where red represents prosperity.

In Western cultures, conditioning of red color and experiences start in early schooling as students receive feedback regarding academic errors in red. Red is, also, associated with alarms and stop signs that convey danger and command enhanced attention. Examples include when California issues a “Red Flag Warning” that signals imminent danger of extreme fire or when the American Heart Association uses red in its guidelines to indicate hypertensive crisis (a blood pressure reading higher than 180/120) that necessitates medical care. Over time, repeated pairings of a color with negative stimuli can influence subsequent behavior.

Bazley writes “Our findings suggest the use of color deserves careful consideration when it’s to be used on financial platforms, such as brokerage websites or by retirement service providers…..For instance, the use of color could lead to investors avoiding the platform or delaying important financial decisions, which could have deleterious long-term consequences.”

In finance, when market prices go down, this is referred to as being ‘in the red’. The media also routinely illustrates market falls in bold, red graphics.

In regard to finance, Bazley was most surprised to find how red color appears to prolong pessimistic expectations in relation to negative stock returns, while viewing the same information in black or blue leads to reversal beliefs.

He said, “This suggests the use of color may have broad implications for stock market liquidity during times of crisis and the momentum anomaly.”

These findings highlight that most of our everyday choices and our financial decisions are likely to be shaped by factors which are not specific to the decision at hand.”

We are easily prey of Heuristics (the rule of thumb), as Nobel Prizes Kahneman and Tversky brilliantly have showed us. The fact is that no matter how rational we think we are when it comes to making financial decisions, we are constantly being influenced by things that we don’t even know about. Something as simple, and apparently irrelevant, as the color can impact our choices, without we are aware of it.

The idea that anyone can be entirely objective and analytical in any decision is utopia. Our brain is inundated with informations, many of which is just noise. Extracting the few useful informations from the gigantic mass of data hitting us is an ungrateful task for our brain.

This is why one of the most often repeated pieces of financial advice is also the most important: stay invested for the long term using simple and transparent financial instruments, like broad index-funds. A no-brainer strategy that minimizes decision making.

More decisions you make, the more chance you have of being influenced by external factors that have nothing to do with what you are actually trying to achieve.