To be a successful active investor, you don’t just need to buy the right stocks at the right time; you also have to decide which stocks to sell and when to sell them.

The problem is that investors are prone to what behavioural finance experts call the “disposition effect“, the tendency to sell winning investments prematurely to lock in gains and hold on to losing investments too long in the hope of breaking even.

Hersh Shefrin and Meir Statman identified and named this fallacy in 1985. Because people dislike losing significantly more than they enjoy winning, they will hold stocks that have lost value yet sell stocks that have gained value.

The disposition effect is related to the “prospect theory” presented in 1979 by the Nobel Prizes , Daniel Kahneman and Amos Tversky. Kahneman and Tversky noticed that losses generate more emotional feelings which affect individual than the effects of an equivalent amount of gains. In. the chart below you can see how the same amount of gain or loss would produce much different values/utilities in the brain of the subject: people will tray to minimize loss much more than to maximize gain. Thin aversion to loss is the foundation of the “disposition effect”. 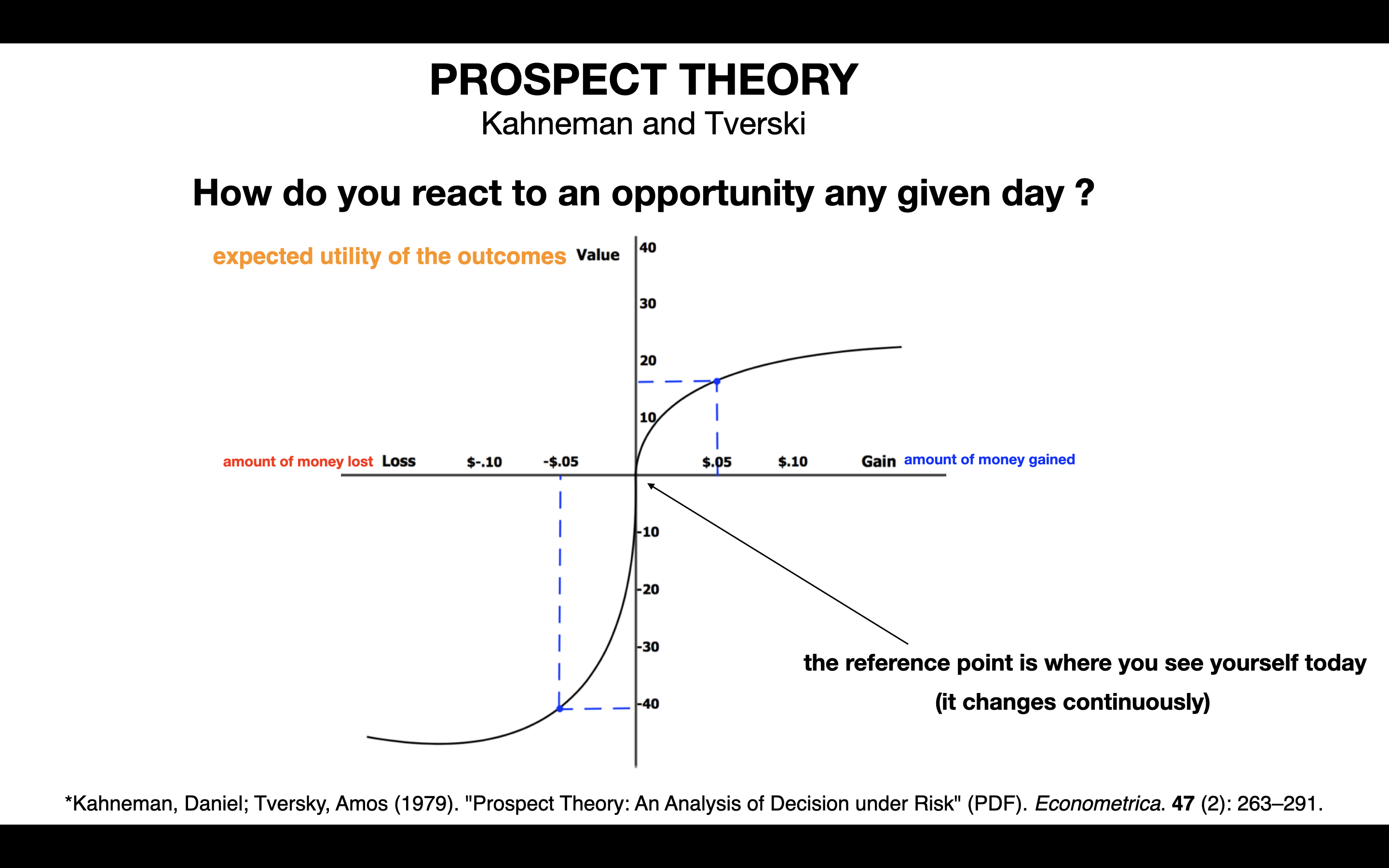 Besides the prospect theory and aversion to loss, there are other levels of explanation of the disposition effect:

Toby Moskowitz explained in his 2010 AQR working paper, Explanations for the Momentum Premium that the disposition effect “creates an artificial headwind: when good news is announced, the price of an asset does not immediately rise to its value due to premature selling or lack of buying. Similarly, when bad news is announced, the price falls less because investors are reluctant to sell.” The disposition effect therefore creates predictability in stock returns and thus provides an explanation for the momentum premium.

In his 1998 study, Are Investors Reluctant to Realize Their Losses?, Terrance Odean found that the stocks investors sold too quickly as a result of the disposition effect continued to outperform over the subsequent periods, while the losing assets they held on to for too long remained underperformers.

Recently Li An and Bronson Argyle has given a further contribution to to the behavioural finance literature with their study Overselling Winners and Losers: How Mutual Fund Managers’ Trading Behavior Affects Asset Prices published in the September 2021 issue of the Journal of Financial Markets, in which they examined the selling schedule of mutual fund managers in response to unrealised profits. Their data sample covered the period 1980-2018. The found that “given an unrealised gain and loss of the same magnitude, mutual fund managers are 1.8 times as likely to sell the gain as to sell the loss“

Some Images and Informations are from